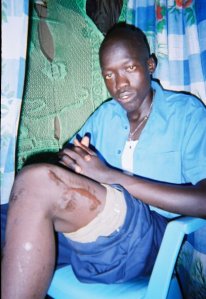 one of my students named Jada emmanuel, is a young boy of only 15 or 16. hes not exactly sure :). i had developed a somewhat special relationship with him due to a home visits i made to his house for a photo shoot (Jada was shot by the rebels of the LRA only two years ago and has some pretty intense wounds so i was taking some photos of that). from the photo shoot visit, i found he was living alone and that his hut which he built for himself was completely empty and basic. this of course made me feel bad for him but it had initially ended at that point. i knew many of my students were in that same situation.
well. the other day, tuesday i believe, jada stopped by to meet with me and ‘seek advice’. he came and sat just outside of my bedroom and told me about how he was really at the end of a dead end road. he expressed how he truly felt helpless. ‘… i just… i dont know what to do…. what do i do now?’ he said. living alone, for 5 years now… he wakes up every morning alone, comes after school to a house along. cooks his dinner and eats alone ( and thats only if he finds money for eating. he says most
days he will just eat the lunch given at school and then wait to eat again until the next day at school), then he goes to sleep every night… every night.. alone. but these weren’t even the matters of his concern. he was coming to express his problems with school fees. it is now approaching final term for his school year and he has absolutely NO money for paying the fees.
his dream is to finish this year and next but unfortunately, last vacation he was unable to make enough money to last him for all years school fees. (most students will take one to two years working, to raise and save the $40 it takes to pay for one year of school. then go to school for a year. stop, and work another 1-2 years to raise enough for another year of school— and the slow discouraging cycle continues. hence so many students giving up, or ending up at age 24, still in high school.)

so now here he is with nothing to finish this year. i could see in his eyes the saddness he had just thinking about having to loose yet another thing… his education; so close to the end.
i dont know what it was but his pain and anxiety was hitting me so strongly and i really found myself at a loss for words. normally i find myself giving words of encouragement/ relative bible verses to give them strength, but this time…. my tongue was tied. i was speechless and it scared me. his pain was actually hitting me- instead of me detaching myself from it like normal.  i sat in silence and stared for a while; sighing many times. and finally i said…. Jada i need to pray. i need you and i to go and pray and ask God to show us what it is we need to do; how it is that he is going to help you this time. because i just dont know.
when i left i went up on this nearby mountain ( a wise young man once told me that Gods presence is strong in the mountains ) to pray. i prayed and i cried and i prayed and i cried. i went home and cried and cried and cried and cried. i was angry. i was lost. i heard nothing. but i was asking! i was asking and God wasnt answering! where was God? i was knocking! where was god?
as i was praying and crying, i kept thinking about how i knew that at that very moment, i had enough money to pay for this final terms school fees. and i wished so badly that i could just give that to him to help him . but i was conflicted with the famous rule that solidarity workers live by: ‘ dont help just the one, or youll have to help them all.’  i didnt want to send a false message to any of my other students that i was just an american whitie coming to save the day. but this thought kept coming to me. this thought… and this heavy pressure on my chest. my chect was burning inside, and it felt so heavy. as i felt restricted by the rule to not help just one, another thought came to me though; it was saying ‘ is that the way jesus loved though? did jesus refrain from loving one or 12 people becuase physically he couldnt love them all? did jesus ration his love? NO! thats not how jesus loved’ i kept thinking, ‘this isnt your money sophie. its Gods money. its gods money to give. if hes moving you to give it, its not your place or the worlds place to tell me whether its appropriate to give it or not.’ and i thought about the necklace around my neck that says ‘matt 25:40’ how can i wear a verse that speaks of treating the least of these as though they were jesus, and yet walk away from this boy when God was putting it on my heart to bless him.
as soon as i accepted these thoughts, the pressure and pain on my chest literally floated up off of me; and i knew this was what God was calling me to do.
the next day after some shopping in the market, i set out for Jada’s house. I had been there just the Once before when i went to photograph his war wounds– this time, i set out- from the opposite side of town. and was standing before a hundred different and new back alleyways that might or might not lead me to his house. i clearly hadn’t this part through- the getting the gifts to him part. So i said, ‘welp holy spirit- guess youre gonna have to lead me..” and i literally set one foot blindly in front of the other for a miles walk or more.   Winding and weaving behind makeshift market stores, down one dirt path and up another; each time i felt a slight prompting from the spirit– there i would turn.  after a while, this exciting strategy started to feel a bit silly and even just stupid— How, did i think this would land me in front of Jada’s hut- when it lay in the midst of  several thousands just like it???……………one. more. step.
i looked up–
there was Jada standing outside of his small mud hut– smiling in disbelief. and so was i.

i shared verses of encouragement and made it very clear the things i felt God wanted jada to know as his son, and that i was not giving these gifts but that they were from God. as i unloaded pens and paper for school, detergent for washing, a flashlight and batteries for studying, vitamins for his health, a school uniform shirt, and 25 packets of biscuits ( which he says will last him ‘soooo long’ 🙂 ), i could see his face lighting up as i handed over each item. he glowed as he held the new school uniform shirt saying ‘…. it has nice buttons’ he couldnt believe the blessings he was receiving just as he thought he couldnt hold on any longer, and he kept saying ‘God is great. God is so great’. finally i handed over the money to pay off his school fees (17,000 ugandan shillings.. which is equivalent to 10 us dollars….) and his eyes began to sparkle. he didnt cry.i think he was in shock and disbelief. holding the bill in his hands like Gold… he smiled and said…. with the most proud face… ‘ im going to take this money tomorrow! i will pay it all off tomorrow and have nothing over my head!’
ill never forget the joy that jada had radiating from his every cell. i sat and watched an instant rejuvenation of his faith. i saw his faith and joy be renewed in the blessing that God had sent me to give on His behalf and i felt so blessed to be a part of it. walking away i knew there was a young boy inside his little hut smiling and probably tears streaming down his face, and that there in that no longer empty hut, jada no longer felt alone; for i know he was left feeling Gods presence right beside him.

Things i write about